The three-row SUV is an increasingly popular format among Canadian drivers looking to balance family comfort with high-end performance. The Ford Explorer has been a longstanding best seller in the market, thanks to its powerful engine, advanced technology, and great interior comfort.

With the new 2021 model now available at our dealership, will the Explorer continue to lead the three-row race? To find out, we've set it against one of its competitors from German carmaker VW. Read our 2021 Ford Explorer vs 2021 Volkswagen Atlas comparison review to see how the two SUVs fared.

The 2021 Ford Explorer is an elegant car considering its size and power. Its large front grille and swept-back lines give a solid appearance that avoids the boxiness of some larger SUVs. The VW is a little more rounded and looks more compact and hatch-like, and has a more overall Euro-style design.

Both cars offer seating for six as standard when the middle row is fitted with dual captain's chairs. However, both can also be equipped with a middle-row bench for three, bringing the total capacity to seven. The main seating difference between the two cars is in the amount of space afforded to the passengers. The Ford follows the North American tradition of providing ample room in a spacious cabin, while the VW's European format is tilted slightly more toward cargo than passenger space.

Both cars offer all-wheel drive as an option, with the Ford using rear-wheel drive as standard and the VW front-wheel. An automatic transmission is standard on both, with the Explorer boasting a ten-speed box compared to the VW's eight-speed.

The standard Explorer engine is a 2.3L turbo I-4 making a hefty 300 horsepower and 310lb-ft of torque, plenty enough output to propel the relatively heavy SUV along with ease. In contrast, the Atlas's standard engine is a fairly disappointing 2.0L turbo model making only 258 horsepower and 235lb-ft. This relative lack of power is slightly compensated for by the torque output being balanced toward low revs, but it has to be said that a car of the Atlas's size and weight would benefit from packing a harder punch.

Strangely, Ford's much better performance isn't achieved at a higher fuel cost. While both cars offer a decent rating of 11.7L / 100km for city driving - remember that these are large vehicles - Ford's figure of 8.7L / 100km on the highway is comfortably better than the VW's 9.8L.

With the Ford, there's a choice of an 8" infotainment touchscreen or a larger 10.1" version. The Atlas also offers a choice, but only between a 6.5" as standard or 8" on the high-end trims. 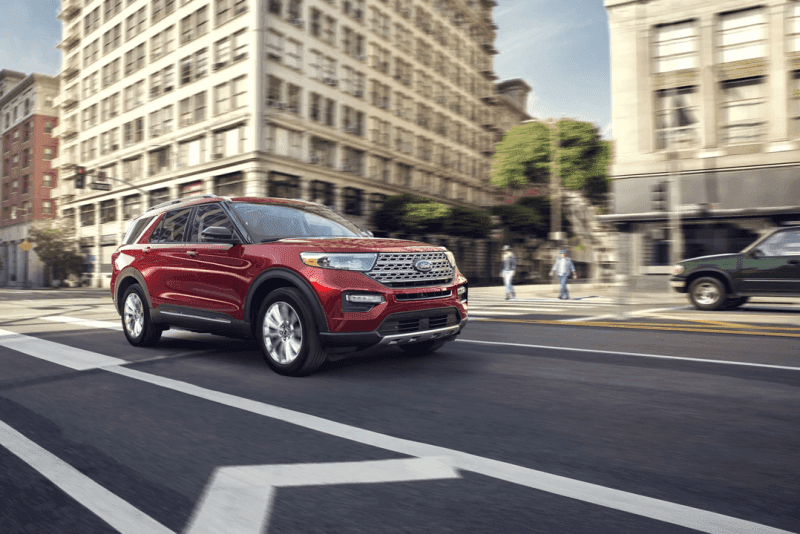 There's no doubt that the Atlas is an attractive SUV for those looking at the more affordable end of the market. However, the 2021 Ford Explorer offers more car for the money, with better performance, meaner fuel consumption, and a more comfortable and advanced interior.