Ford & Disney Team Up to Reveal the All-New Ford Bronco

Ford & Disney Team Up to Reveal the All-New Ford Bronco

The imminent return of the iconic Ford Bronco has been creating a stir among dedicated off-road enthusiasts. But the automaker apparently has plans to make an impact far beyond that niche market. 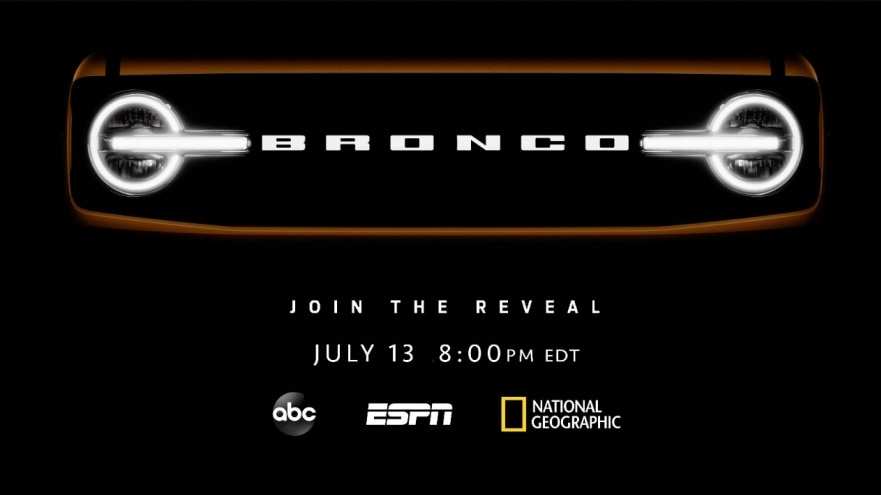 The widely anticipated all-new SUV range will be unveiled in a unique collaboration with Disney, in series of three-minute videos shown across the ABC, ESPN, and National Geographic channels. Set to broadcast after 8pm, 13th July, the videos will reach a huge potential audience of prime time viewers.

Each video will be a short-form Ford Bronco review of a different model in the line-up, tailored to each channel's target audience. The videos will be presented by country singer Kip Moore on ABC, climber Brooke Raboutou in the ESPN version, and fellow climber and film director Jimmy Chin fronting the National Geographic film. All three shorts will be available on Disney's Hulu streaming service the following day.

The Bronco line-up is expected to consist of a mid-size four-door SUV, a smaller compact sport version, and a two-door off-roader with removable doors and roof panels for a thrilling open-air experience. The standard engine will be a 2.3L EcoBoost model generating 270 horsepower, with a ten-speed transmission feeding the all-wheel drive as standard.

Hopefully, the big reveal will also confirm the availability of a meatier V6 engine coupled with manual transmission, delighting off-roaders who want a rawer, more powerful style of handling on the trail.

Following the video launch on 13th July, the Ford Bronco line-up will be readied for delivery to Canadian dealerships in late summer onward, with an expected starting price of around US$30,000.